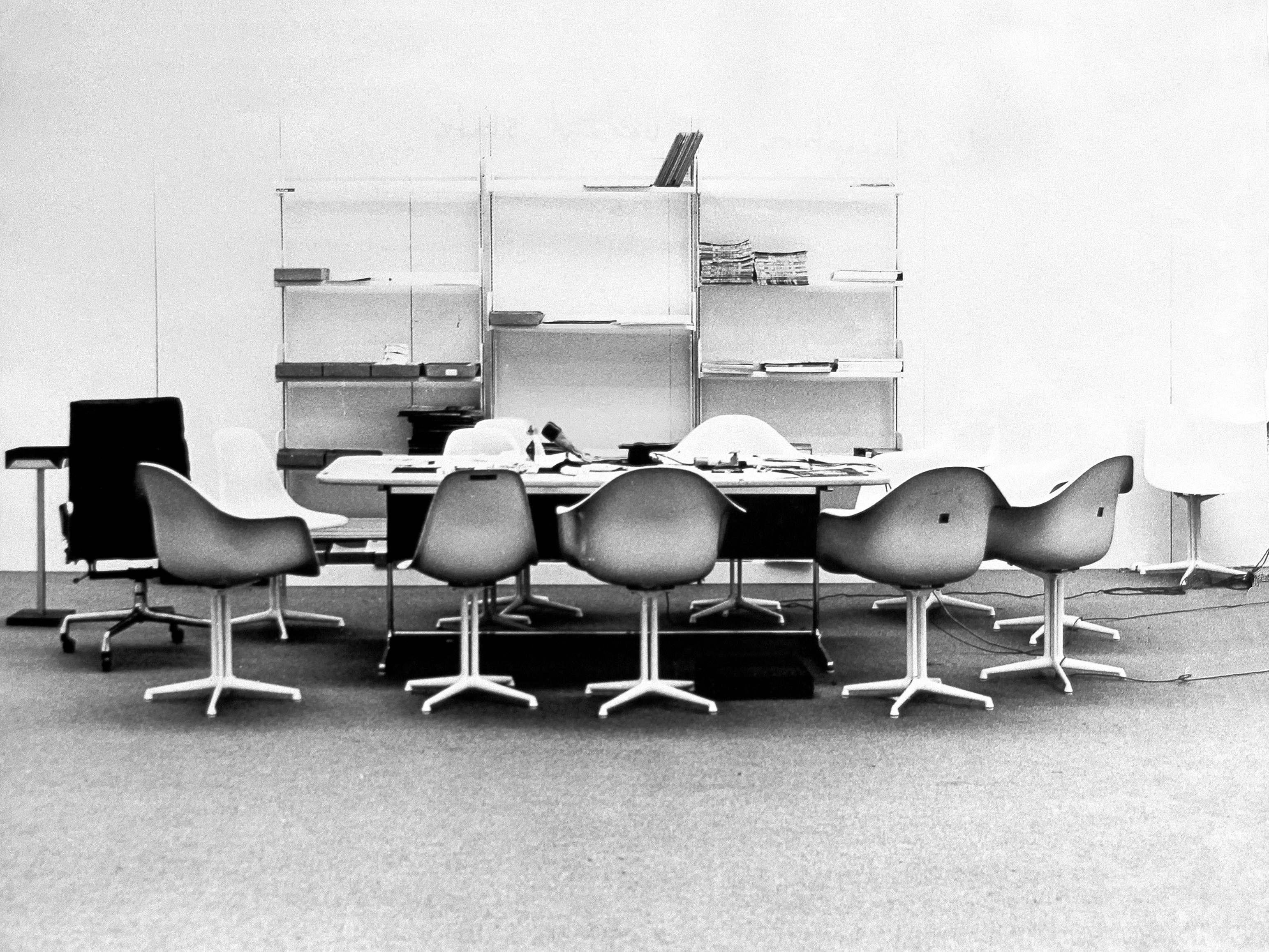 The Artist Placement Group (APG) initiated and organised ‘placements’ for artists in industry or public institutions, where artists researched, worked on projects and realised art works. They made the case for the mutual benefit of the artists’ presence in organisations. Artistic practice and knowledge would no longer be confined to the studio and the gallery, but their field of activity would be extended to commercial, industrial and administrative contexts to act upon societal organisation and decision-making processes. The emergence of the APG concept took place against the backdrop of an on-going discourse (not only in the UK) about ‘dematerialisation’, moving away from an object-based understanding of the work of art. The statement, Context is half the work, testifies to this spatial and ideological shift; out of the studios and into the institutions of society, from object-based work towards information, to site-specific work and to social relationships.

The initiative, originally conceived by Barbara Steveni (previously Latham), led to the founding of the APG organisation in 1966, remaining active until the 1980s, involving professionals from a range of fields. The founding members included Barry Flanagan, David Hall, John Latham, Anna Ridley and Jeffrey Shaw. The group was formed in the mid-1960s, around the couple Barbara Steveni and John Latham. It was particularly artists associated with St. Martin College of Art, where Steveni and Latham had taught, who gathered as a Think Tank for discussions in their house in Notting Hill.

The APG was neither an artists’ collective nor a placement agency. There was no explicit membership, but rather a loose network of artists who would be proposed for placements. In addition to the founding members Ian Breakwell, Stuart Brisley, Roger Coward, Hugh Davies, Andrew Dipper, Garth Evans, Leonard Hessing, George Levantis, Ian McDonald Munro, David Toop, Marie Yates, and Nicholas Tresilian, Rolf Sachsse and Ros Sachsse-Schadt were also, at various times, part of the APG. In addition there were also members and supporters from other areas of society.

The APG was initially constituted as a charity with a board of artistic directors (the ‘Noit panel’), and later converted into a limited company (APG Research Ltd.). The board of trustees consisted of representatives from industry, the media and art institutions, and at a later stage also a representative from a union. Barbara Steveni was the key driving force behind creating contacts and maintaining correspondence with hundreds of companies and organisations, as well as potential sponsors and advocates. John Latham was very present in APG’s public appearances and defined much of its language with his cosmological ideas on value theory and the dimension of time as the primary creative platform for artistic impulses. Latham’s Time Base theory accompanied internal APG debates and was adopted by some of the group members in their conceptual vocabulary.

The early APG placements were almost exclusively negotiated with partners from industry. Simultaneous initiatives such the Experiments in Art and Technology (EAT) in the US and the Federation of German Industries’ Ars Viva program, (Artists Working in Industry) tended to focus on technical cooperation and making industrial materials available to artists, whereas the approach of the APG went far beyond this. The APG was also not interested in models of sponsorship and patronage. It developed its own terminology and procedure for the placements, each time undertaking extensive negotiations with the partner organisations. Ideally, each placement first saw a several month ‘feasibility study’, during which the artists would familiarise themselves with the specific context and could then formulate an artistic proposal for the longer placement to follow. In reality, it often did not progress beyond the feasibility study, for which the artists already received a payment. The APG itself took an additional fee of 15-20% of the artist’s fee for their organisational services.

The central premise of the negotiations was the principle of the ‘open brief’, a type carte blanche intended to guarantee open-ended work during placements. The artists were intended to function as independent observers within the organisations, with the substance of their work developing from the on-site process. John Latham coined the term ‘incidental person’ for this role in placements, one far beyond the classical understanding of the role of an artist.

From the mid-1970s onwards, the APG initiated closer collaborations with public institutions and ministries. This was enabled following a memorandum recommending collaboration with the APG, which the Civil Service Department sent to various government agencies in 1972, following considerable negotiations by Steveni. At the same time the APG also initiated closer collaborations with public institutions in other European countries, and from about 1977 to present itself as ‘APG Multinational’ with the concept The Incidental Person Approach to Government in Germany, Austria, France and the Netherlands.

However, the APG was more than the sum of the placements it realised. Although not an artist collective in the traditional sense, their public presentations as a group were often performative in their nature. The APG’s ambivalence between performance and genuine negotiations could be particularly witnessed with their temporary ‘office’ during the exhibitions between 6 in the Kunsthalle Düsseldorf (1971) and inn7o – Art & Economics at London’s Hayward Gallery (1971/1972). APG artists gathered around a central negotiating table, referred to as ‘The Sculpture’, to discuss the aims of the APG with invited representatives from business and government. It was not without irony that the language and aesthetics of corporate and institutional worlds were clearly visible in the APG’s style.

APG’s critics took this ambivalence and open-minded approach to representatives of the social elite as a reason to publicly attack the APG’s lack of political clarity (or as they described it, ‘naivety’). Following the exhibition at the Hayward Gallery, Marxist critics such as Peter Fuller, Gustav Metzger and Stuart Brisley (closely associated with the group himself) accused the group of pursuing a reformist approach, whilst disregarding real class conflict. Such categories barely existed in the minds of APG and in particular Latham, as they saw artists as occupying a third position beyond commercial and political interests. The question of change in society shifted away from one of class and domination, with the APG’s reassessment of the role of the artist as a ‘concept engineer’, situating them in the context of media and system theoretical discourses of the time.